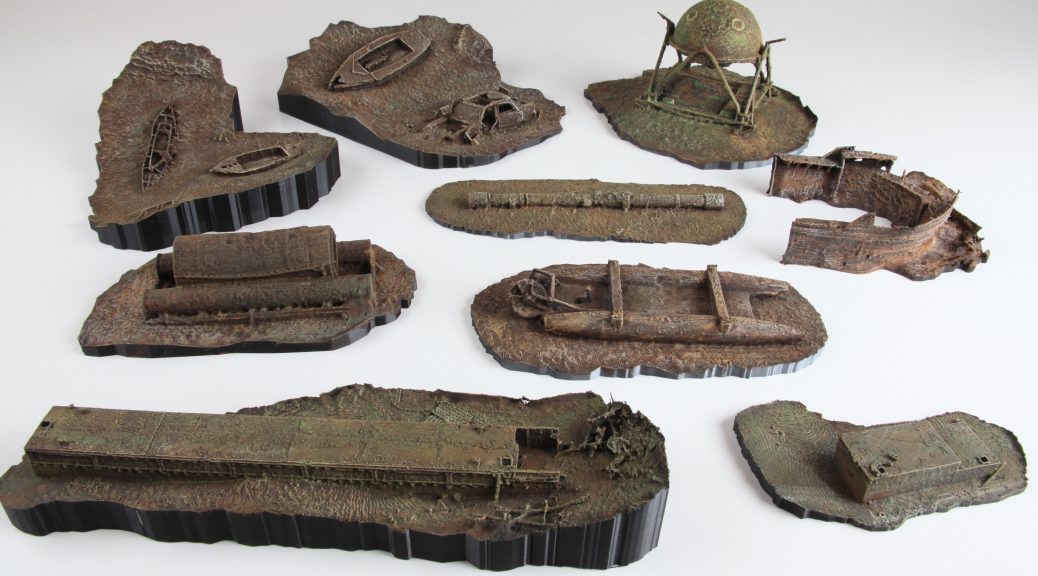 The ‘Banter See’ is an old military harbor in Wilhelmshaven / Germany at the North Sea. There many ships and Submarines were built for the First and Second World War. After Germany lost the war, it was closed and cut off to the other harbors by a dam.

A distance measuring bar from the second world war in 10m water depth.
It served on a warship to optically measure the distance to the enemy ship. The operator stood in the center and looked into an eyepiece. At the ends of the tube were optics, the angle of which was adjustable. When the operator brought both images to cover, the distance could be read off a scale.
Download the 3D-Files here

The car lies on 20,5m and is the deepest diving spot in the Banter See. 2005 a ‘Treasure Box’ was placed there with a geocache. A small sailing boat rests close. When the conditions are good (only in the Winter season), it is a wonderful diving spot.
Download the 3D-Files here

1986 a little UW-Station / Habitat was placed there in 10m water depth by the local diving club.
You can download the 3D-Files here

It was built from airplane gasoline tanks.
Download the 3D-Files here

Made for the divers:
You can download the 3D-Files here

One folding Boat and one rudder boat. On the right side the remains on a third one. They are not far away from the car. You can download the 3D-Files here

There is a quite huge pontoon in the old harbor of Wilhelmshaven in a water depth of 10m. Obviously it was used to transport round items with 4,7m in diameter. Probably it was used to transport parts of submarines during the Second World War. 27 submarines were built in the harbor of Wilhelmshaven. The diameter of 4,7m would fit to the pressure hull of submarines type VII. On the pontoon there are masses of stones, so it looks like that it was sunk there on purpose.
Some more info here: Ponton

In the North of the old military harbor in Wilhelmshaven (Banter See) there are two quite big objects. We identified them as swim jetties (German: Schwimmsteg). They were built during the Second World War and can be seen in historical photos.
Some more info here: Jetty

At the dock cesspool (Docksenkgrube). The visibility here can be quite bad.
You can download the 3D-Files here