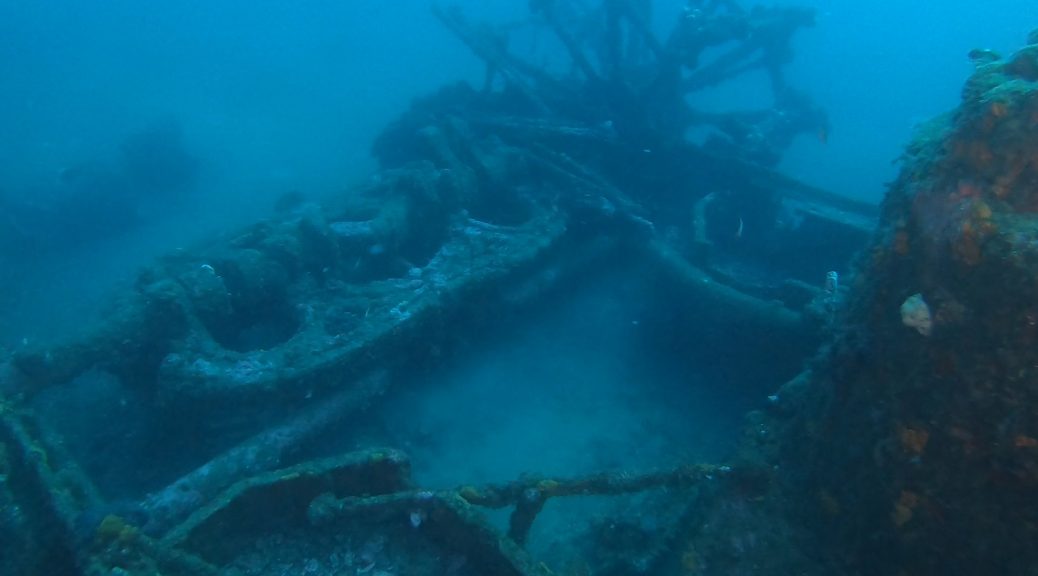 The Steamer Michel C, was built in 1866 by the Henderson, Coulborn & Co., Renfrew shipyards in Belfast (Ireland). It was 39.25 m long and 5.75 m wide and had a tonnage of 285 tons.
On November 26th 1900, the Michel C sailed to Cannes at night in foggy weather. She carried beer and flour when she hit the the steamer Amphion C that was owned by the same company and heading for Toulon. One man (mechanic) was killed. The 11 crew members only have time to board the Amphion before seeing their ship sink.
The wreck lies in a depth of 39m between rocks. It is a popular diving spot.

You can find the files in the download-section

Interesting technical fact:
In the model, I noticed that the star point of the wheels is off-centre.
This can also be seen in the printed model. At first it looked like an error in the model that I couldn’t explain. But now I understand. With this design, the angle of attack of the blades was tilted during rotation so that they pierced the water almost vertically.

Newspaper: Bolton Chronicle – Saturday 29 November 1851
La Ville de Grasse, going to Cannes, and La Ville de Marseille (commanded Captain Combes, an Englishman), coming from Italy, ran into each other near the Isles d’Hyeres, in what is called “the Little Pass”, near Cape Langoustier, with such violence that, in few minutes, La Ville de Grasse was submerged. La Ville de Grasse had great many passengers, nearly the whole of whom perished. Among them was the Russian Count Huaug, with his family seven persons, all lost. Capt. Combes, notwithstanding the injury sustained to his own vessel, at once launched his boat to rescue the persons from La Ville Grasse, and picked up several; but in the confusion the long boat was swamped. Some of the crew and passengers of the Ville de Grasse escaped in a boat, and were received into the other steamer. On the collision taking place heartrending shrieks arose from both vessels. A young Englishman on board the Ville de Grasse was asleep in bed at tbe moment the accident. Hurrying on bis clothes and seizing his more valuable effects rushed upon deck. The confusion was frightful — all on board was iu despair — the vessel was about to sink, when a boat of the Ville de Marseille approached. As he was about to fling himself into the boat by a rope, a German passenger preceded him, but the latter, seeing his wife and son on the back of the deck, abandoned his own chance of preservation to hasten to them. This enabled the Englishman to seize the rope and let himself into the boat. At the same moment at which he entered it, the sailors perceived that the steamer was just on the point of sinking; and, fearing to swamped in the movement of the water, they rowed hastily off. They had scarcely got thirty yards away when the Ville de Grasse disappeared. When the boat reached the Ville Marseille, all the persons rushed at once the side to climb on board; and this would have caused the boat to upset if the Englishman had not seized a rope and held it. Among the passengers of the Ville de Grasse was a French captain, who rendcred valuable assistance in saving the passengers. Captain Combes displayed extraordinary zeal, firmness, and intelligence. His crew and passengers surrounded him, and asked him to run his vessel upon some adjacent rocks; but he refused, and in two hours after, anchered in the roadstead of Hyeres, where he made repairs, which enabled him arrive at Marseilles, although his vessel leaked so much that the passengers had to assist the crew at the pumps. The Nantes, of Bordeaux, picked up several persons, and treated them most kindly. Many have perished, but precise number is not yet known. The body of the son of the poor German mentioned above was seen floating on tho water. Two ladies who were taken board the Ville de Marseille, died immediately after from terror and emotion. The captain of the Ville de Grasse has, it is said, arrived at Cannes. This vessel, in addition to a cargo of merchandise, had 35,000f in specie. Nothing was insured.